Secret of the Blue Room 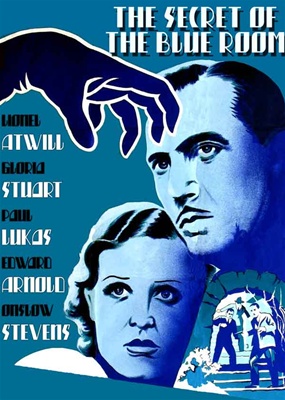 Today’s Trillion Dollar Movie is the 1933 horror thriller The Secret of the Blue Room. If you like stories about haunted houses full of secret passageways and plagued by longstanding curses, give this one a try. The picture is a staple of that genre, first released by Universal Pictures and remade at least twice by that same studio as The Missing Guest and The Murder in the Blue Room.

The premise: Three different suitors are all in hot pursuit of Irene Von Helldorf, a rich, eligible debutante played by Gloria Stuart (seen some 50 years later as the old Rose in Titanic.)  There’s a decorated soldier (Paul Lucas), a veteran reporter (Onslow Stevens) and a brash young man who isn’t as accomplished as the other two men, but is the most cocky in pushing his cause as Stuart’s best potential soulmate.  To prove his mettle and courage, and also to show up his rivals, he issues a boastful challenge, that the three of them each spend a night in the ill-fated “Blue Room” on the Von Helldorf estate.  It’s been locked up for 20 years for a reason  — the last few people to stay there all died mysteriously.

I won’t give away the plot twists but the mysteries, the bodies and red herrings all begin to pile up. Some of this Gothic gimmickry has become so conventional, you can see where it’s headed long before it gets there. But considering its age, this isn’t as creaky as you might think. The cast is exceptional, including two of the most memorable characters actors from the 1930s,   the urbane horror film fixture Lionel Atwill as Stuart’s wealthy father and the acerbic Edward Arnold as a police investigator poking around into eerie happenings in the Blue Room.

Enjoy and do return again next Friday for another Trillion $ Movie.

This site uses Akismet to reduce spam. Learn how your comment data is processed.